EFA Project Space presents Permissions, an exhibition of new works produced during the 2019/20 SHIFT Residency. There is no way to introduce this exhibition without acknowledging that the works were created during a time of unexpected upheaval and a profound shift to the infrastructure of our lives. As the world moved into a time of global pandemic, economic upheaval, and a deep reckoning with systemic racism, the SHIFT residents were invited to make new bodies of work. 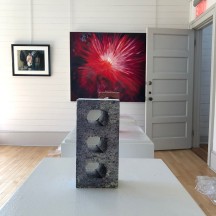 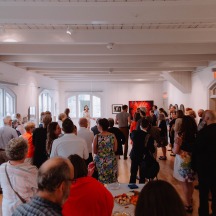 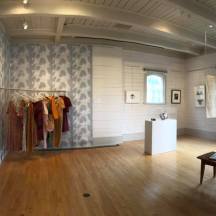 “At first glance, the artists in Dead Ringer construct familiar objects and images: a bikini, a brick, a faceted glass vase. On closer inspection, an undercurrent of disquiet and hidden meanings emerge. The artists in Dead Ringer ask viewers to disassemble their works, to consider both what they think they see and the realities and epiphanies that come with closer looking. Calm and order feel alien to this moment of #MeToo, fake news and inexorable cruelty. Each of these artists makes works that are indelible, jaggedly smart and timely, looking at our moment and refusing to sugar-coat its anxieties.” – Elizabeth Duffy, Curator

Tiny Acts Topple Empires is a group exhibition that considers the manifold expressions of rebellion and multitude of ways contemporary art can challenge the status quo and enact incremental change in our culture. The work engages with all types of rebellion: formal, material, political, and otherwise.

‘PARIS RIOTS’
When we speak of citizen journalism, many of us think of the Arab Spring and Egypt’s youth movement launched on January 25, 2011 with its reliance on smartphones, social media and viral video. As one Egyptian activist tweeted, “We use Facebook to schedule the protests, Twitter to coordinate, and YouTube to tell the world.” Only a few years earlier, in 2005—before the advent of Facebook and Twitter—protests and riots raged on the outskirts of Paris, sparked by the accidental deaths of two young boys who were hiding from police in an electrical substation in Clichy-sous-Bois. The rioting spread throughout the Île-de-France and eventually to the suburbs of other cities, giving expression to the hopelessness of a generation of marginalized youth, the children of predominantly Arab, African and North African immigrants, stuck in ghetto high-rises in the banlieues. Over several months, more than 9,000 vehicles were set on fire, as well as scores of public businesses; France declared a state of national emergency. A government-imposed media blackout sent journalists scurrying for imagery, which they found posted on personal blogs, YouTube and Flickr: lo-res images and video of burning cars and riot police, shot by ordinary people on the ground with cheap cameras and rudimentary phones. These images served as immediate and authentic documents, and are a precursor to subsequent uses of social media as tools for dissent. I painted my Paris Riots series based on a handful of lo-res images that were circulating on Flickr and elsewhere as the riots unfolded. The paintings are small but fiery like their source images, and speak to the urgent need to communicate what was happening on the ground. But unlike the digital images, the paintings embody physical space, and they instill, through the materiality of the gesture and the paint, the urgent physicality of the moment. Hence, the paintings offer the possibility of a different kind of engagement from what we’re used to when confronting political conflagration: the proximity afforded by the physical object, as opposed to the virtual image, more than a decade after the riots. ~ J. Garnett, 2017

“New Year’s Day” (video 2:48 min.) is included in a special program of post-election screenings and symposia at Petzel Gallery, NY:

We need to talk…
Artists and the public respond to the present conditions in America
January 7 – February 11, 2017
Petzel Gallery, 456 West 18th Street
Something different for the month of January 2017, We need to talk… will try to address the myriad issues presented by the election results of November 8th.

That Was Then…This Is Now.  Installation shots