project:rendition, a collaboration by JC²

The visual essay documenting project:rendition is itself a creative collaboration between the artists of JC² and the Journals Designer at Duke University Press, Sue Hall. In order to preserve the original design’s relationship between images and text, which would have gone missing in a standard online excerpt, we have by special arrangement with the Press made available the full article. (from PublicCulture.org)

project:rendition was a collaborative project that incorporated elements of installation, printed agitprop, audio, and performance into an interactive environment. The project was produced by JC2, a collective comprising the artists Joy Episalla, Joy Garnett, Carrie Moyer, and Carrie Yamaoka. The exhibition took place in May–June 2007 at Momenta Art, an artist-run charitable institution in Brooklyn that promotes emerging and underrepresented artists.

project:rendition used the enactment of “rendering” to examine military policies hidden from public view. The term extraordinary rendition refers to the clandestine kidnapping and extradition of suspected terrorists to countries where they can be interrogated and tortured beyond the reach of the U.S. judicial system. While extraordinary rendition is generally reserved for supposed high value suspects, subtler forms of political repression, state induced terror, and disenfranchisement are common, insidious, and long-standing. Throughout history, similar acts have proved effective means of rendering individuals and entire populations politically mute or existentially invisible.

The centerpiece of project:rendition was a tall, five-sided structure made entirely of mirrored panels and functioned as an inverted panopticon, or surveillance tower. Upon entering the “pod,” would-be voyeurs instantly became specimens to be observed, able to see only their own reflections multiplied endlessly in the one-way mirrors. Alternatively, visitors could choose to stay outside in the “safety” of the darkened gallery and watch other audience members subject themselves to the brightly lit pod.

The project drew lines of connective tissue between text and action. Copies of John Winthrop’s 1630 sermon “A Model of Christian Charity” were made available to visitors as a free silk-screened broadside. Winthrop’s seminal text has been a touchstone for countless U.S. politicians over the past two hundred years, including Ronald Reagan in his “Shining City upon the Hill” speech and George H. W. Bush in his “Thousand Points of Light” address. Intended as a cautionary tale, Winthrop’s sermon has since morphed into a philosophical foundation for American exceptionalism and its contemporary manifestation, superpower hubris.

As installation, project:rendition invoked a theatrical space that alternated or reversed roles of spectatorship and performance. JC2 invited musicians, artists, and writers to give readings and performances in the space throughout the duration of the exhibition. Viewers’ and performers’ fleeting sense of personal power and vulnerability were tested as expectations and conventional parameters for behavior were rendered in flux or illegible. Lines were blurred between contradictory states of being: paranoia and security, privacy and voyeurism, power and vulnerability, self-awareness and self-absorption, engagement and indifference. Which side are you on? Are you in or out? 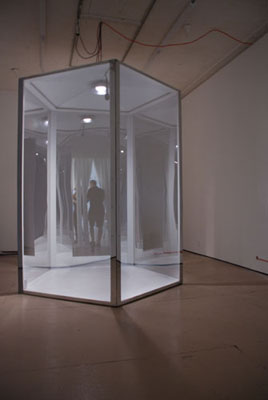